Cleveland in 2015 was still shaking off the body blows it took from the Great Recession and even from the early-2000s recession before that. But this was University Circle -- Cleveland's fastest-growing employment hub.

That hub, the center of the region's eds-n-meds jobs machine, continues to crank out employment opportunities at a pace exceeding the national average, according to the Bureau of Labor Statistics.

So when Midwest Development Partners representatives make their presentation of revised plans for Circle North on Friday to the City Planning Commission, it will show a bigger and more ambitious vision.
The original conceptual design, previously approved by the commission in 2015, showed 625 multi-family residential units, seven townhomes, a 160-room hotel, 110,860 square feet of retail and 1,245 parking spaces in several multi-level garages.

The commission will be asked to approve the revised design and infrastructure plans which show 807 multi-family residential units, 104,990 square feet of retail and 1,469 parking spaces. The rest of the conceptual plan would remain the same, according to documents submitted to the city.

A proposed infrastructure plan shows the removal of high-speed turning lanes from Chester Avenue eastbound to Stokes Boulevard southbound as well as to MLK Boulevard southbound. The goal is to slow down traffic and improve pedestrian safety as more mid- and high-rise buildings are built nearby.

The surrounding area already has four large residential buildings -- the 7-story Park Lane Villa, 11-story Judson Manor, 13-story Fenway Manor and the 20-story One University Circle. It also has the Cleveland Clinic's 16-story W.O. Walker Center.
Also being sought on Friday is commission approval of conceptual designs for a 24-story apartment tower and its associated parking garage at 10600 Chester Ave. On that project component, Midwest Development and its financial affiliate Ponski Capital Partners are joined by the Chicago-based team of White Oak Realty Partners and FitzGerald Associates Architects.

Planning Commission recently approved the first new-construction element of Circle Square -- the 11-story Library Lofts apartment building and new MLK Branch Library. Ground will be broken for that structure on or about July 1.

Although its groundbreaking will be the first new building in the Circle Square development, Library Lofts' construction is intended to occur simultaneously with 10600 Chester, said Chris Ronayne, President of University Circle Inc.

"We are on a trajectory of growth," he said. "One University Circle and Centric, being 95 percent occupied, are giving market investors confidence." 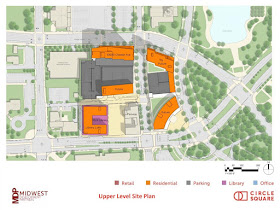 The proposed hotel would rise on the site where the current MLK Branch Library has stood for 50 years, 1962 Stokes Blvd. After the new library is built and opened in two years, the old library will be demolished.

"The hotel is currently planned for the next phase, connected to the parking," Ronayne said.